The figures below speak for themselves and do not need much interpretation, but I will state the obvious on this tidbit of a rant to elucidate any audaciousness of the observations of a common man.

I must admit that after years of observing a decaying culture, one tends to become pessimistic and risks becoming more closely aligned to the misanthropist.  For in many industries and careers; we can probably find some interesting insights to the ways our nation functions, and yet there are possibly some careers that do not show to the observer the symptoms of chaos and mismanaged markets that insulate people from the reality of the state of the union.  There are many indicators to understand the market system and the monetary system of which we are all bound to.  The price of basic economic commodities are a direct indicator of the state of our economies, but in stating this premise, price itself has many other subordinate intricacies that are often overlooked by the average person.

Most people probably do not know about how the federal reserve private banking cartel works within our nation.  How they inflate and deflate the value of the currency they create out of thin air, a proprietorship that our forefathers warned us about many years ago.

The term identical sales is the measure that many companies monitor and keep track of the health of their sales base.  This statistic used in retail industry analysis compares the sales of stores that have been open for at least one year, or same-store sales compare revenues earned by a retail chain’s established outlets over a certain time period, such as a fiscal quarter or on a seasonal basis, for the current period and the same period in the past (usually the same period of the previous year.)  Same-store sales allow investors to determine what part of new sales has come from sales growth and what part can be attributed to the opening of new stores.  The financial statistics that contribute to our sales base is also people on receiving SNAP benefits.  I have monitored and studied these figures, and over time I have seen the increase in frequency of these benefits.

For a reflective man, I have held a very unique position for over three decades in a career that has afforded me the ability to observe behaviors from a very large sampling of the population in my geographical area.  I have seen the direct results of a welfare state overrun with a bureaucracy that self-perpetuates itself.  If your employment has something to do with welfare, then you would want to protect your own employment by perpetuating the welfare system.

In the last three decades I was able to examine the spending habits from all socioeconomic statuses of our population, and their means of which to make these payments for their life sustaining sustenance: their consumption of food.  The choices of goods, and how theses purchases were effectuated led me to consider that many welfare recipients are truly governed by gluttonous and wasteful habits, and that they clearly have became more dependent on a system that ultimately robs those who contribute to it; the working American of their capital.  This money should probably stay in their own pocket after you discover just how these abuses of our capital are put to use, and how many people are misusing the system.  The criticism should be mainly directed at the system itself, since it has been reckless in its inception, and account-less in its auditing.

The criticism of my observations are clearly identified by responding to me and suggest that I cannot possibly know the reasons for every case this money is granted, and ask me “Who am I to judge such decisions?”  I would reply that it is a meaningless point to refute my evaluation, that I needn’t know every case, and that if using a statistical linear regression, one could determine the burdens of our welfare system, and that should be explanation enough for the inquiry.  My experience alone would reflect on the people that tend to abuse the system at taxpayers’ expense.  The fact that some of these recipients are able to enjoy meals far better than I do, and that many are not accountable to find work, or eliminate a drug habit they have is unsettling, but what is reprehensible is that many are middle class, able-bodied young people who choose not to work.  The SNAP benefit usage in my city has been an increase of +47% since 2007.  I’ve personally witnessed people deciding to collect these benefits and therefore continue dragging the system down by birthing children that they cannot afford, only to have living costs subsidized by taxpayers.  This is immoral!  I’d really hate to start in on the anchor baby issues, but having porous borders is also perpetuating the problems. 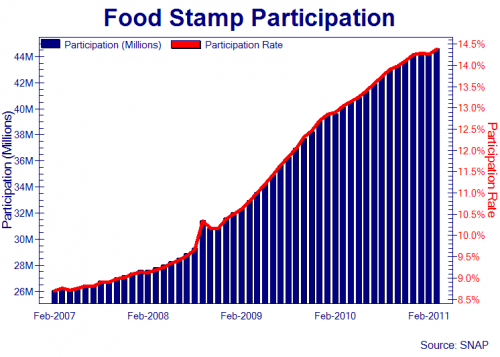 People simply will take things for granted, and depend on these means when there are not many solutions to the economic downturn in the United States.  They are anesthetized to the burden they pose since they believe it is a “right”, or that it is an obligation to their “entitlement!”  This sickness is why millions upon millions flood into our country because they know the US government will redistribute the wealth.

The welfare system is bankrupted, and cannot sustain itself if the middle classes are targeted by progressive taxes they cannot continue to afford, and the diminishing numbers of the population are eroding under the weight of bureaucratic stipulations and ineffective cost measures.  The lack of jobs created in the United States is another part of the same problem.  If people cannot work, then they will be forced to find what work is possible, (if indeed they do choose this work), and furthermore they at the same time may qualify and rely on collecting government handouts for the interim.  Unfortunately the jobs are being outsourced, the manufacturing base of the U.S. is being attacked by taxation and bureaucracy, and the trade agreements our government manages are harmful to the sovereign rights of the nation we live in.

Much of what our taxpayers fund, has enabled a government with no sound economic strategy to sustain these policies in assisted food benefits that create nothing other than a welfare state unable to become solvent.

It is my view after many years of observations that these policies are introduced and implemented on the intent for America to economically fail.  If you study the policy choices of our government,  if you attend to the decisions of the monetary policy implemented, and if you study history, then you can clearly see the correlation in these events.  There is no difference in choice from the left and the right, or from congress and the senate.  Not even the president has the hutzpa to stop the money masters; just ask JFK.

The Food Stamp program is “hidden” from view through Electronic Benefit Transfer Cards that work just as credit cards. This article visualizes the size of the program and the vast amounts of people participating.
One Hundred Dollars $100 – Most counterfeited money denomination in the world.
Keeps the world moving.

* US territories Washington DC, Puerto Rico, Guam, were are excluded from above calculations (No Walmart Super Centers in those territories).
Special thanks to BWM for preliminary data mining.